Saying our goodbyes, our friends from Brazil took Karrie to the airport and we departed Marsh Harbour on 8 March making the inside trip down to Little Harbour staging for the passage to Eleuthera. We motored down as the Crew had to pay close attention to the chart and visual navigation while we zigged and zagged thru the sand ridges. The depths varied from 11 to 14 feet for the majority of the short trip and they didn’t want to rub the paint off my keel. We anchored off Bridges Cay, about 3 miles north of Little Harbour. The harbor itself is too shallow for my draft so the crew launched Sea Tigger and headed off to Pete’s Pub. They reported a rollicking ride to the Bar across Little Harbour Bay which is exposed to the East but DDD Robert showed off his small boat skills and kept them relatively dry.

They met some interesting folks at the beach bar including a Fiction Writer and Nature Photographer Kimberli Bindschatel http://www.kimberlibindschatel.com/ and her family. The Captain ordered her Poppy McVie Series for the Animal Lover in his life but I believe secretly looks forward to reading them himself after Karrie has a chance. They enjoyed sharing some food and rum with them and hearing about some of their adventures and experiences. Darkness came quick and the winds calmed a little for the dinghy ride back (or maybe it just seemed that way because they couldn’t see the waves??). When they arrived back, The Admiral whipped up some hot soup and they all turned in.

Up early the next morning, listened to the local cruiser net on the VHF, took a look at the various weather websites, stuck our head out above deck and liking what we saw, were off via Little Harbour Cut on the rising tide and on the way to Eleuthera.

During the passage to Eleuthera we first saw some water spouts shooting up and then came across several pods of what we identified as Pilot Whales that appeared to be drifting and sleeping. We backed down the throttle to try and avoid spooking them and drifted by getting some great pics. Quite an awesome sight.

Evening descended before reaching the north end of Eleuthera providing us with a beautiful sunset. No moon provided some amazing star gazing. We reached Egg Island well after dark and motored into the bay approaching the NW side of Current Cut to anchor for the night. Waking to sunny skies and light winds, Captains Brian and Robert discussed the options and strategies involved with navigating the Cut. The channel thru the Cut is no problem but there are areas of shifting sand about 100 meters out on the east side that could present issues. Without any local knowledge it was questionable. The decision was made to wait for the last hour of the flood tide and give it a go. That’s when The Admiral pulled rank and took Command of the Situation and we weighed anchor then promptly turned tail and went around thru Fleming Channel instead.

This was a little longer route but probably the safer option. Guess we’ll never know if we would have made it.

Once under way the winds came back and built out of the ESE to about 20 to 25 knots enroute to Hatchet Bay. This offered me a chance for a good upwind sail but slowed my progress putting us at the entrance to the Harbour after dark. The Lee of the island provided little protection to speak of so the decision (with The Admirals Approval) was made to enter the Bay. The chart indicated, and a local boat already in the Harbour confirmed, that the entrance carried 16 foot depth across the entire opening. Only problem was the opening was 60 feet wide with 30 foot cliffs on both sides and no channel markers or lights. Did I mention earlier that there was no moon (and now cloudy)? To say it was dark would be somewhat of an understatement.

Fortunately the wind was dead on the nose so Captain Brian lined me up on the ILS as Captain Robert worked the Landing Light at the bow we initiated our IFR approach. The wind limited Tower to Helm transmissions so Admiral Joyce provided a communications relay. Slight translation error between Straight and Starboard but that occured only once and was quickly corrected…..

Broke out of the darkness and saw what was advertised as an opening about 200 feet out. I have to say 60 foot looks pretty narrow in the dark 200 feet away. Anyway the Captain gave me a little throttle to maintain steerage and made a reasonable centerline approach down the runway. Capt Sully would be proud.

I’ve heard it said that – Any Landing You Can Walk Away From Is A Good Landing – so I’ll assume this one qualified. Allan on “S/V All The Way There” congratulated us when he saw our touchdown was complete and offered some local knowledge about the anchorage. The Bay is totally enclosed and the town boasts that it is Home of the Country’s Safest Harbour (says so right on the sign – as you’re coming in from land…doesn’t say much about coming in from the water, after dark, on a moonless night, with 25 knots of wind). Once inside we were totally protected as they claimed. Dropped the hook in 25 foot of water and had a peaceful sleep.

Awoke the next morning to rain and I got a good bath. My first in quite a while. The crew wandered around this sleepy little town with a few restaurants and local bars. The one place we had heard about called The Front Porch was booked on Sunday and closed on Monday so we didn’t get to try it out. Invited Allan over for drinks and h’orderves to thank him for the assistance.

Took Sea Tigger to the town dinghy dock on Monday and started walking to Gregory Town about 6 miles north. About a ½ mile down the road, just when they were rethinking their decision to walk, a local stopped and offered them a ride (in back of pickup truck). In town they found Rebecca’s Beach Shop – Home of the Pirates Revenge World Famous Hot Sauce. Put in an order and then explored the area. Had a great lunch at the Surf Shack, picked up the Sauce and headed back. After about 30 minutes of walking back they snagged a welcomed return ride back to Hatchet Bay. Visited with some folks on “S/V Fine Lines” anchored in the harbour and then arranged for Daniel (the only Taxi Driver in town) to take them on a trip down island to the “The Rainbow Inn” in Alice Town for Monday Night Pizza Night featuring authentic Wood Fired Pizza and Live Music. This is the place to be on Monday nights in central Eleuthera. The place was packed and enjoyed meeting lots of locals, vacationers and cruisers. Pizza was great and Daniel meet them for the return trip home to secure the boat so we could continue south in the morning.

Rode the outgoing tide out of Hatchet Bay. A daylight passage was somewhat less dramatic. Nice sail down to the anchorage just outside of Rock Sound on the southern end of Eleuthera. Anchored in calm winds and water like glass. Beautiful sunset but no lobsters or fish to be found. Next morning we waited for high tide to take the channel over to Cape Eleuthera Marina at Powell Point. On the way we saw a unique site – a catamaran being towed. Interesting thing is they were moving at almost 8 knots and headed for the same destination. Captain made a mental note to check on that when we reached the Marina.

My tanks were fueled up when we arrived and the Captain made a tactical error backing into the slip fouling a line around the prop and rudder bringing the engine and steering to a sudden stop which added some fun to the docking procedure. Already ¾ the way on the slip so no harm done.

Admiral spent a lot of the next day playing with the washing machines in the Marina. The bottle neck was only one dryer. However she enjoyed meeting a local school teacher from the States who was the acting Assistant Principle at the local middle school. Apparently the Marina laundry doubles as the local laundromat and meeting site.

Found out the folks being towed into the Marina were John Casey and Christa Greer on “S/V Low Flite”. Their vessel had been struck by lightning earlier in the week and had a complete electrical failure of all the systems, engines and electronics. They were deeply involved with the logistics of getting the boat back to Ft Lauderdale. Ouch!

That afternoon, the Captain and Admiral borrowed a couple of bikes and embarked on a 4 ½ mile trek around the area. They say you never forget how to ride a bike but the Captain made it look like that adage might not hold true. He looked a little wobbly to me. The surrounding property looks like someone started to develop it cutting in some roads and power lines but didn’t make it very far only completing a few condos near the Marina property itself.

The Admiral invited John and Christa over for dinner on Paws as they had lost all food due to the electrical failure. We also ran into a cruiser we met previously at the Rainbow Inn who joined us for a few pre-dinner drinks. Bram is on “S/V El Camino” on a Lagoon 410. An enjoyable evening discussing travels and experiences with these new friends.

Uneventful departure the next morning leaving Eleuthera in our wake and crossed Exuma Sound sailing to Compass Cay in the northern part of the Exuma island chain. Dropped the hook on the west side of the island and enjoyed another gorgeous sunset. 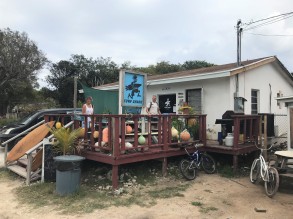 About the same as Pixie and Bills 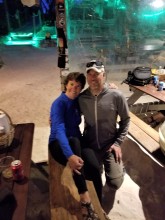 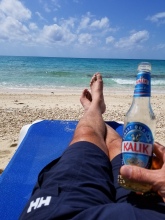 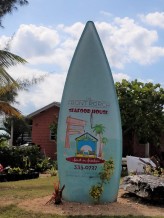 Cooking it up right 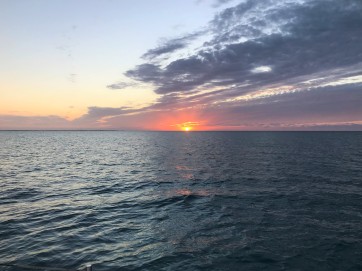 I thought everyone liked Sailors 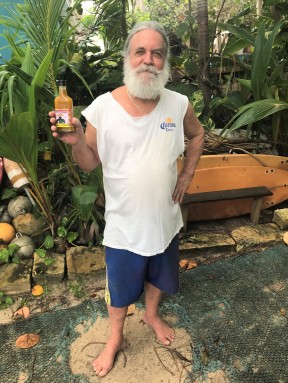 In the slip at Cape Eleuthra marina 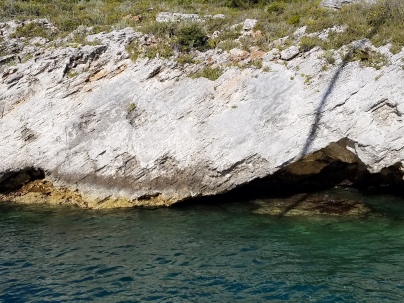 Lets hope they don’t need it 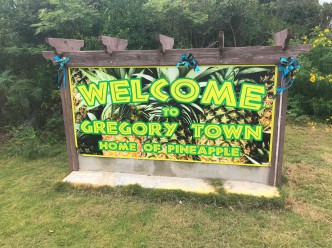 Just off the interstate 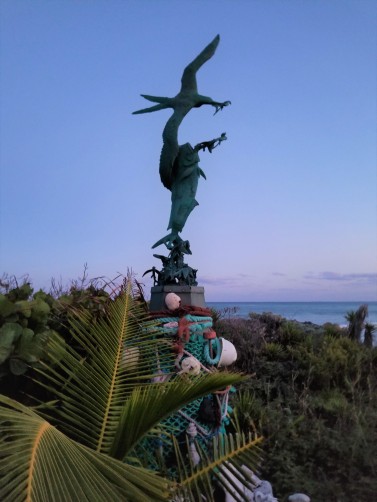 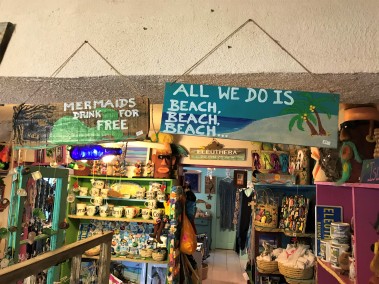 Mandy this is for you 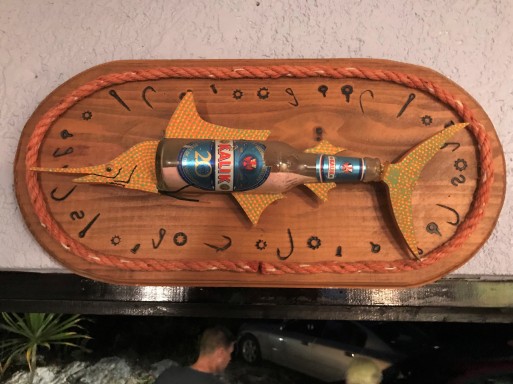 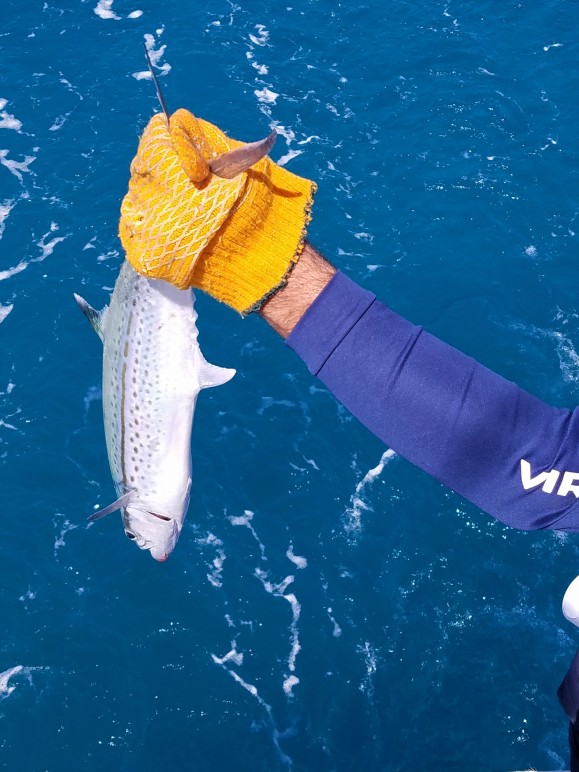 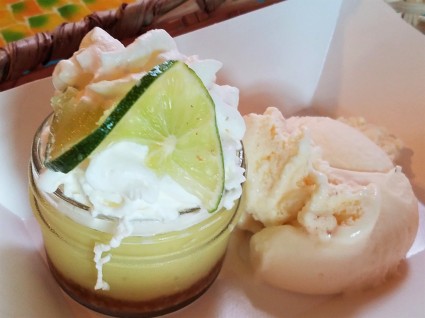 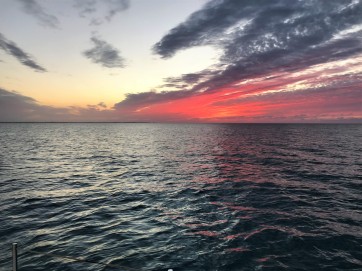 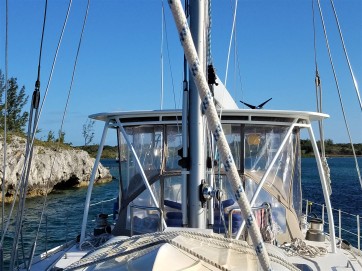 Squeezing out of Hatchet Bay 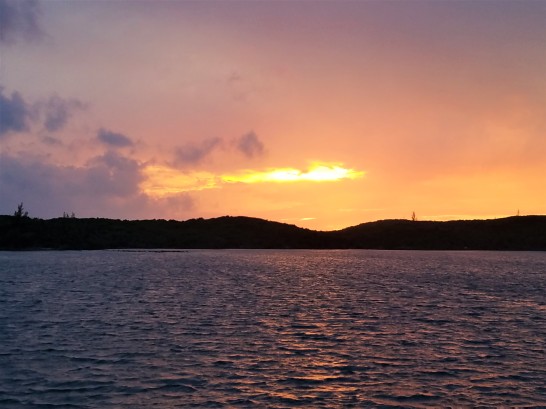 The national dog of the Bahamas 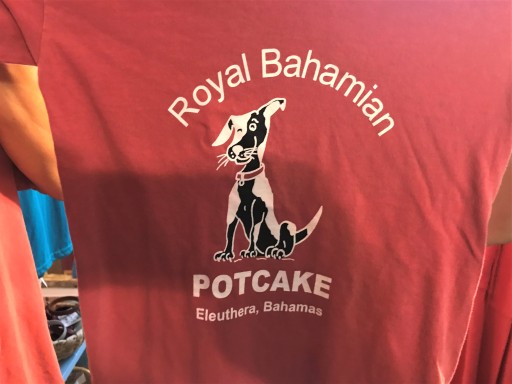 Town is pretty proud of this

Which way do we go?

Join Pawsitive Latitude and crew on their epic journey to the outer reaches of the world as we navigate the high seas. Here we will share stories, adventures, challenges, and discoveries during our travels. View all posts by pawsitivelatitude

4 thoughts on “Capt Sully Ain’t Got Nothing On US”

Become part of our Crew